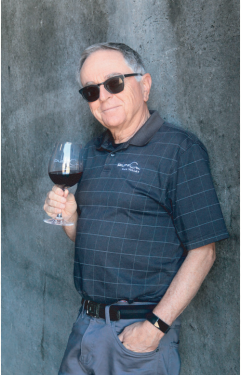 In the early 80s, my quest started with the Bordeaux varietals of Merlot and Cabernet Sauvignon and the goal of making affordable World Class wines. While getting started, I also took a dive into doing a Brut style Blanc de Noirs sparkling wine made from non-traditional grapes. I called it Robin's Glow as the color showed proudly in flint (clear, colorless glass). I actually started that before making any commercial white wines. I made that wine for several years but while it was building popularity the costs to make bubbles then for a realistic return tied up too much money in that marketplace. 40 years later, I dove in again last year making another Brut style sparkling with color from non-traditional grapes. But this time in a new and untested method that we developed on our own, Single Stream Fermentation. Although very limited in production, it has been a rousing success and sold out within six months of release.

Harvest 2022 is starting and the first grapes of the year are the grapes for the second edition of our Brut Rose. More information on that in the future. This vintage shows great promise at this point as 2021 showed and produced. It is still early and while yields are variable depending on the variety and exact vineyard location, we are hopeful and optimistic.

Coming up is another unusual and different offering that I have had only two releases since my winemaking beginning. It is a grape rarely bottled because while it is regularly an important Bordeaux grape in blending with others, it only rarely produces a complete wine on it's own: Petit Verdot, not to be confused with the more widely known and unrelated Petite Sirah a Rhone type grape. This release will only be my third for pureCru Winery. The first two were 2012 and 2013. Uniquely dense and concentrated with very pretty aromatics which is not common every year. This is very intriguing.